Samuel Darling, a physician practicing at the Canal Zone Hospital in Panama, initially reported histoplasmosis and named the bacterium in 1904. He mistook the bacterium, which resembled Leishmania in tissues, for a parasite. Histoplasma capsulatum is a thermally dimorphic fungus that occurs as a mold in the environment and at temperatures below 35°C, and as a yeast in tissues and at temperatures between 35 and 37°C.

Histoplasmosis is found all throughout the world, although it is most frequent in North and Central America. Infection with H. capsulatum arises as a result of either passive exposure during normal day-to-day activities or active exposure connected to occupational or recreational activities. The majority of instances are sporadic, due to passive exposure, and are not linked to a specific source. Histoplasma duboisii has a relatively limited geographic range, occurring exclusively in Africa between the Tropics of Cancer and Capricorn. The majority of occurrences occur inside these borders in Nigeria, Mali, Senegal, and Zaire.

The microcondia of H. capsulatum mycelial phase are 2–4 µm in size, allowing them to be easily aerosolized and inhaled into the host’s alveoli. At 37°C, the organism transitions from the mycelial phase to the yeast phase. The attachment of the organism to the CD18 family of adhesion enhancing glycoproteins results in phagocytosis of either form (conidia or yeast) by alveolar macrophages and neutrophils. The yeast form of H. capsulatum is uniquely able to live within macrophage phagolysosomes via many mechanisms, including the capacity to withstand death by harmful oxygen radicals and adjust intraphagosomal pH.

Acute Pulmonary Histoplasmosis: Asymptomatic infection is the most common consequence of a normal host’s exposure to H. capsulatum. In the endemic areas area, up to 85 percent of people have been infected with H. capsulatum, and the vast majority have not had symptoms associated with histoplasmosis. Symptomatic acute pulmonary histoplasmosis is most commonly presented as a self-limited illness marked by a dry cough, fever, and exhaustion. Approximately 5% of individuals may develop erythema nodosum, and 5–10% will have myalgias and arthralgias/arthralgias. Joint involvement is often polyarticular and symmetric.

Chronic Pulmonary Histoplasmosis: It usually affects elderly people, mostly males, who have chronic obstructive pulmonary disease (COPD). Fatigue, fever, night sweats, persistent cough, sputum production, hemoptysis, dyspnea, and weight loss are some of the clinical symptoms. This kind of histoplasmosis is differentiated by the appearance of cavities in the upper lobes and increasing fibrosis in the lower lung fields.

Disseminated Histoplasmosis: Although spread is frequent in most H. capsulatum infections, symptomatic dissemination is more common in immunocompromised individuals and newborns. A CD4 level of 150/mL is related with an increased risk of disseminated histoplasmosis in those who have HIV-1 and histoplasmosis. In most immunocompromised patients, the infection takes a quickly lethal progression with extensive involvement of several organs. Dyspnea, renal failure, hepatic failure, coagulopathy, hypotension, and obtundation may be observed in patients.

Histoplasmosis due to H. duboisii: Infections with H. duboisii differentiates from infection with H. capsulatum in that the two primary organs affected are the bones and skin. Subcutaneous nodules and abscesses are frequently observed alongside osteolytic lesions; skin nodules can ulcerate and drain. Lung involvement is more prevalent than previously assumed, and lymphadenopathy appears in certain cases. The infection is typically indolent and not life threatening, but in the uncommon case, broad visceral dissemination occurs, and the condition mimics progressive disseminated histoplasmosis caused by H. capsulatum; this is notably observed in HIV-infected individuals.

The gold standard laboratory diagnosis of histoplasmosis is the demonstration of yeast on pathological stains and isolation of mold in clinical specimen culture. Choosing the right tests necessitates knowledge of the performance characteristics of various diagnostic procedures in each clinical scenario. The ideal diagnostic approach, like with most other infectious illnesses, is dependent on the time point in the disease’s natural course, the location of infection, the clinical specimen being tested, and the net level of immunosuppression.

The development of H. capsulatum from tissue or bodily fluids is the definitive test for histoplasmosis. Samples collected from blood, bone marrow, liver, skin, or mucosal lesions from individuals with disseminated illness frequently produce the organism. Growth of the mycelial phase happens most typically within 2 to 3 weeks when incubated on suitable medium at 25 to 30°C, although it can take up to 8 weeks. Once a colony on solid medium has been identified, a lactophenol cotton blue test (tease mount) can be performed to determine mold morphology, which will first show septated hyphae, followed by the presence of smooth (or, less commonly, spiny) microconidia (2 to 5 µm in size), and finally, characteristic tuberculate macroconidia (7 to 15 µm in size).

Colonial morphology: Mycelia colonies appear yeastlike, cream to white, smooth, and wrinkled and folded with a yellow core when developed on blood agar at 30 °C. When yeast colonies are grown on blood agar at 37 °C, they are tiny (5–15 mm) and cream to yellow. Colonies develop slowly on Sabouraud dextrose agar at 25–30 °C, becoming white and cottony and spreading across the surface of the agar. Some strains may develop a brownish tinge in the middle as they age. Tan is the inverse. Colonies are tanbrown, whole, tiny (1–2.5 cm in diameter), and form a white tuft in the middle of the colony when grown at 25–30 °C on potato dextrose agar.

Microscopic morphology: At 25–30 °C, cultures reveal septate, hyaline hyphae that are fine and fuzzy. Large tuberculate macroconidia (8–14 µm in diameter; macroaleurioconidia) that are rounded, singlecelled, and warty are generated on short, hyaline, undifferentiated conidiophores. Microconidia, which are tiny (2–4 µm in diameter), round to pyriform, and appear on short branches or directly on the sidewalls of the hyphae, can be produced through cultures. Budding yeasts are produced by cultures cultivated at 37 °C. Yeasts are tiny, 2–3×4–5 µm in diameter, spherical to tearshaped, and Gram negative when cultured.

Screening antigen in urine is typically found to be somewhat more sensitive than in serum across all symptoms of histoplasmosis. Combining urine and serum tests enhances the chance of antigen detection. Antigen testing has also been used on various bodily fluids, such as BAL fluid and cerebrospinal fluid (CSF). BAL fluid is used in individuals with pulmonary histoplasmosis. Histoplasma antigen testing may be a valuable supplement to urine and serum testing. Antigen testing for both fungi reveal response in samples from patients with histoplasmosis or blastomycosis. Antigen detection can be used to monitor a patient’s reaction to antifungal medication.

Molecular techniques have the benefit of high analytical specificity along with faster turnaround times than other diagnostics. A fluorescence in situ hybridization (FISH) approach that identifies H. capsulatum rRNA in blood cultures may eliminate the necessity for colony formation in order to establish a definite and quick diagnosis.

Antibodies take 4 to 8 weeks to become detectable in peripheral blood and are hence inappropriate for early acute infection diagnosis. Antibody testing is particularly beneficial in subacute and chronic types of histoplasmosis where circulating antibodies are present and antigen detection sensitivity is low. A positive antibody test for H. capsulatum, like other serologic tests, shows that the patient has been exposed to the fungus in the past.

The complement fixation (CF) test, which employs two different antigens – yeast and mycelial (or histoplasmin) – and the immunodiffusion (ID) assay, are the gold standard tests for detecting antibodies of H. capsulatum. A fourfold increase in CF antibody titer is considered suggestive of active histoplasmosis. It is also sometimes said that a CF titer of 1:32 suggests current infection with H. capsulatum, however a diagnosis should never be relied only on such a titer. CF antibodies may linger for years after infection; consequently, the existence of a single low CF titer implies little more than that the patient was exposed to H. capsulatum at some point.

In the case of a critically ill patient, a tissue sample should be obtained as soon as feasible to detect for H. capsulatum. The presence of the typical 2–4 mm oval, budding yeasts allows for a preliminary diagnosis of histoplasmosis. The small yeasts are seldom seen in routine hematoxylin and eosin stains; biopsy material should be stained with methenamine silver or periodic acid– Schiff stains. Yeasts are commonly found within macrophages, although they can also be found free in tissues. In patients with disseminated infection, organisms are often seen in bone marrow, liver, skin, and mucocutaneous lesions, and in individuals with a high load of organisms, normal peripheral blood smears may detect yeasts within neutrophils. 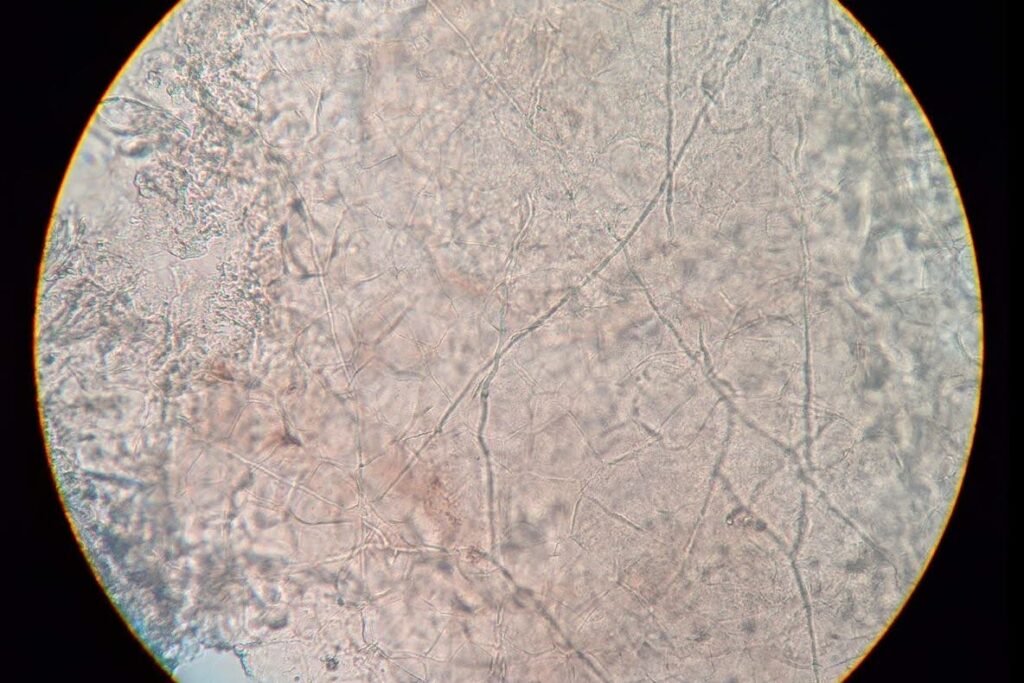 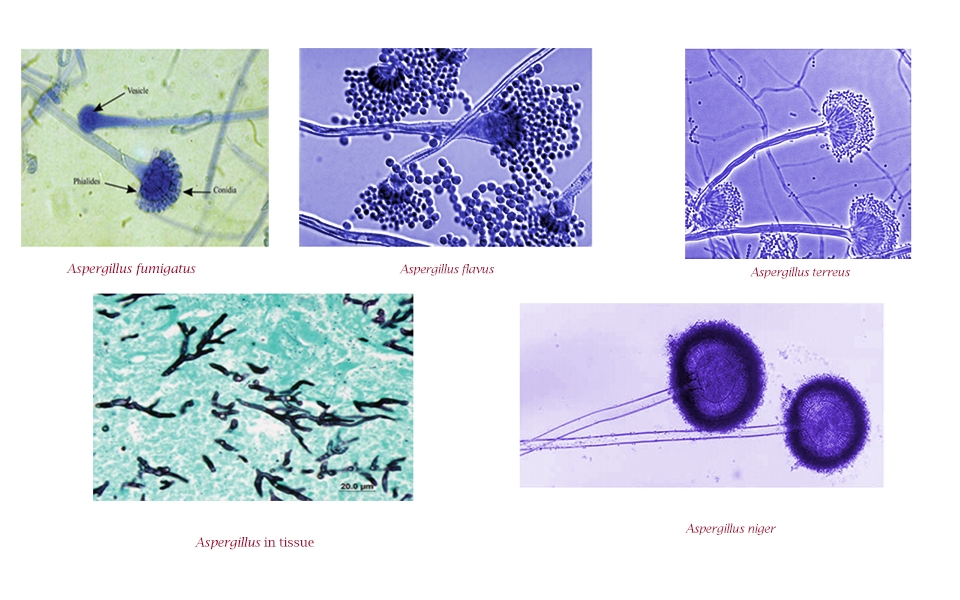