PCR is normally based on a quantitative relationship between the quantities of target sequence present at the start and the quantity of PCR product amplified at any given cycle. A correlation of this characteristic follows an exponential trend, resulting in a doubling of the products created at each cycle. Because the reaction takes place in a closed environment, such an exponential step is absolutely confined to a certain number of PCR cycles. This situation depletes reactant concentrations, enzyme activity, and other factors while increasing products over time.

Thus, the PCR is specified with four reaction stages known as:

In the exponential process the fluorescence signal is proportional to the DNA concentration, real-time identification will take place.

Every cycle in a real-time PCR reaction consists of three major steps. In total, 40 loops of reactions take place.

Since PCR effectiveness is usually linked to thermostable DNA polymerase, enzyme selection is critical. One of the key factors that influences PCR specificity is the fact that Taq DNA polymerase has non-specific annealing of primer activity at low temperatures. As a result, the primer annealing to DNA produces a non-specific product. A “hot-start” enzyme can significantly reduce the issue of non-specific products caused by poor annealing. DNA polymerase is a thermally sensitive enzyme; it does not become active during the early reaction setup and DNA denaturation.

The Reverse Transcriptase (RT) is just as important as the polymerase DNA in qRT-PCR results. It is essential to select an RT that not only produces high levels of cDNA but also performs well at high temperatures. High temperature efficiency is also highly important in RNA denaturation with secondary structures. In a single stage of qRT-PCR, the RT that conserves its activity at higher temperatures enables you to use a target-specific primer with high melting temperatures (Tm).

Choosing the dNTPs and thermo-stable DNA polymerase from the same manufacturer is a smart strategy. It is common for experiments utilizing reagents from different vendors to experience a significant decrease in threshold cycle (Ct).

In each real-time PCR experiment, 10–1,000 copies of the template nucleic acid are used. This is about equivalent to 100 pg to 1 μg of genomic DNA or 1 pg to 100 ng of total cDNA generated via RNA. Excess templates can potentially introduce larger levels of contaminants, reducing PCR efficiency significantly. Depending on how specific the PCR primers are for cDNA rather than genomic DNA, treating RNA templates may be necessary to limit the possibility of contamination with genomic DNA. To address the issue, ‘DNase I’ is an option.

Pure, intact RNA is required for high-quality, full-length cDNA synthesis and may be required for effective mRNA quantification. Any RNase exposure must be prevented, and aseptic conditions should be ensured.

Effective primer design is a crucial process in real-time PCR. In general, primers should be 18–24 nucleotides in length. This delivers actual annealing temperatures. The primers should be designed in accordance with standard PCR principles. They will be target sequence specific and safe from secondary structure. Primers also need to prevent extended homopolymer sequences or repeating motifs from erroneously annealing. Primer pairs should have suitable melting temperatures (± 1°C) and contain about 50% GC content.

To obtain precise reproducibility results (usually, triplicates), design a master mix that contain all of the reaction components except the sample. The use of a master mix reduces the number of pipetting steps, reducing the possibility of cross-well contamination and other pipetting errors.

For normalizing qPCR readings, reference genes or housekeeping genes are being used. Many studies have shown that reference gene identification is necessary to assure consistent and efficient assays. Housekeeping genes are often part of a biochemical system that is essential to an organism’s survival and whose activity is constitutive, or not changed significantly in response to various environmental stimuli that regulate gene expression of interest.

The real-time PCR reaction baseline is the signal intensity during the first PCR cycles, typically 3 to 15 cycles, when fluorescent signal fluctuations are low. The reaction history, or “noise,” may be compared to the low-level baseline signal. For each output in real-time PCR, the baseline is determined subjectively by user analysis or by the automated amplification plot’s analysis. The baseline must be properly specified in order to compute the threshold cycle (Ct) appropriately. The baseline evaluation will determine enough cycles to eliminate the data captured in the initial stages of amplification, but it will not discover the interval where the amplification signal begins to rise above normal.

The real-time PCR reaction threshold is the proportion of signal that reflects a quantitatively major shift over the measured baseline signal. The amplification signal is differentiated from the baseline signal in this process. Normally, the PCR instrument algorithm automatically sets the threshold at 10 times the standard deviation of the baseline ﬂuorescent value in real time. However, the threshold position can be set at any point throughout the PCR’s exponential phase.

The threshold cycle (Ct) is the number of times the reaction fluorescence signal crosses the threshold. The Ct value is utilized to calculate the starting quantity of DNA copies since it is inversely proportional to the speciemn quantity at the starting point. For example, a specimen with double the starting material does achieve a Ct one cycle earlier than a specimen with half the amount of its starting material. This also signifies that the PCR operates at 100% output in all reactions.

The PCR amplification is also template-oriented. The consumption of numerous templates produces a massive number of amplicons. As a consequence, the more the initial material, the earlier the multiplication and the lower the Ct value measured. Ct values are ~3.3 cycles apart in a 10-fold difference in template quantity.

The correlation coefficient is a measure of how closely the standard curve fits the results. The R2-value denotes the linearity of the normal curve. R2 should ideally be 1, however the highest value is generally 0.999.

Relative quantification is quite different, but somehow it relies on  standard curves. This type of quantification compares the gene expression of an unknown sample to that of other reference samples.

Based on dye chemistry, there are two basic categories for identifying nucleic acid targets by real-time PCR. One method makes use of dyes that interact with double-stranded DNA. The other approach employs fluorescent probes that are specific to a sequence. The fluorescent signal increases in proportion to the exponential growth of the DNA products produced after each PCR amplification cycle.

The fundament of the non-specific, real-time PCR detection method is DNA binding dyes. These catogery dyes function by interacting with the DNA strand’s minor groove. These dyes emit strongly when intercalating with the double stranded and subjected to light of a particular wavelength that corresponds to the dye but exhibit negligible fluorescence when free in solution.

Furthermore, it is very obvious that these minor groove binding dyes might make it difficult to interpret the results of PCR assays because they also interact with primer dimers and other non-specific amplifications. Primer-dimers frequently arise in situations when there are few or no specific templates.

The specificity of PCR is enhanced by amplicon detection using aprobes. The simultaneous multiplexing of several targets is made possible by the employment of a fluorescent dye-infused probe that efficiently absorbs, emits, and releases energy at various wavelengths.

The signal to noise ratio refers to the relationship between a fluorescent dye signaling positive hybridization and a signal from aberrant fluorescence. It is preferable to have a high signal-to-noise ratio (i.e. more signal, less noise) In general, oligoprobe chemistries that use a non-fluorescent quencher and need the least interaction to produce a signal are most preferred.

Passive reference dyes are often used in real-time PCR to normalize the fluorescent output of reporter dyes and to correct fluorescence fluctuations that are not PCR dependent. Standardization is essential to correct variances between wells caused by changes in the concentration or volume of the reaction, as well as to correct variations in instrument readings. Most real-time PCR equipment utilize ROX dyes as the passive reference dye because they do not interfere with the real-time PCR reaction and have a fluorescence signal distinct from that of many reporter or quencher dyes.

It may be challenging to develop assays for estimating viral titers. Scientists also want to know how many viral copies are in the samples. This is frequently accomplished by comparing a standard curve generated using known genome equivalents or nucleic acid isolated from a titered virus’s control. The accuracy of the materials used to create the standard curve determines reliability. Depending on whether the target is an RNA or DNA virus, reverse transcription and real-time PCR efficiency play important roles. Test design will also influence whether the assay counts functional viral particles or the overall number of particles.

The genome is examined for duplications and deletions in copy number variation analysis. The design of assays, and more critically, the generation of standard curves, would be decided by whether relative or absolute quantification is required. The assay architecture focuses on PCR performance in real-time and the accuracy necessary to detect variations in a single sample.

Allelic discrimination techniques may detect variations as small as single nucleotides. In contrast to the previous techniques, the fluorescence endpoint is estimated to determine the genotypes of the SNP. The architecture of the primers and probes is especially important in ensuring that allele-specific cross-reactivity is prevented. 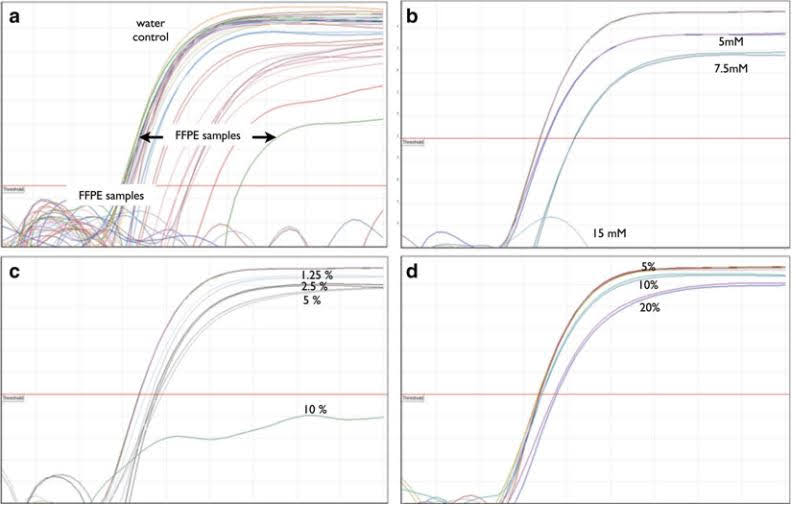 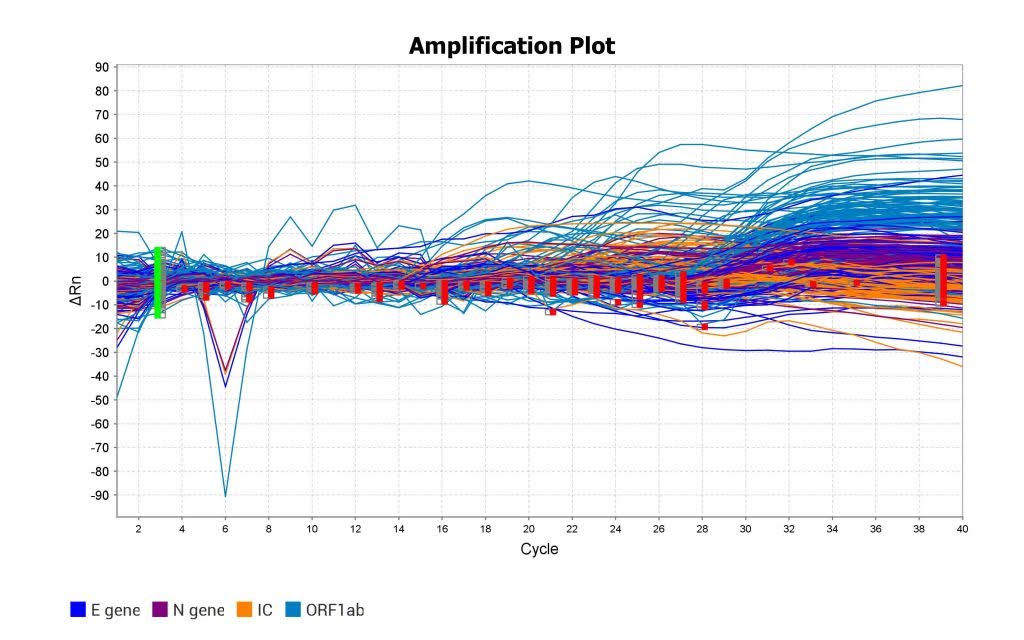